The co-chair for Tuia 250 national commemorations says it’s not a bad thing if people want to express their views, as a replica of Captain Cook’s Endeavour makes its way into Tūranganui-a-Kiwa.

This has been the most anticipated day of the Tuia 250 commemorations but there has been strong opposition to the replica coming to the area James Cook named as Poverty Bay.

Local iwi oppose the ship’s visit and have refused to do a pōhiri.

Tuia – Encounters 250 is an initiative marking 250 years since the first onshore meetings between Māori and Europeans. 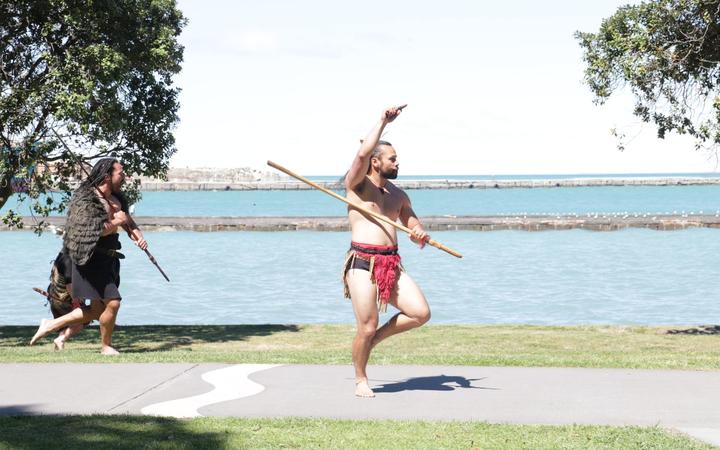 The start of the Tuia 250 commemorations over the weekend.
Photo: RNZ / Māni Dunlop

Dame Jenny Shipley, who is the co-chair for the Tuia 250 commemorations said today opened with a “very thoughtful and sobre” dawn service which remembered the “unintended but tragic consequences when Cook arrived”.

But she said today is also a beginning and it’s not necessary to argue about who is right and who is wrong.

“I’ve been very proud of both Māori and Pākehā, the way they’ve come to this and rather than arguing the facts of history, have tried to explore the emotions that it’s evoked and that’s been the experience here this week.”

There is no single truth here, Dame Jenny said.

“It’s quite right that 250 years on some people are really proud and want to move on, they see this as a huge contribution to society, others see it as a tragic intervention.

“It is not a bad thing if people want to express their differences and New Zealanders are ready to grow up and do that. If there are protests, of course they’re entitled to express their view, but I can tell you there are many in both of the iwi who also want to move forward and there’s got to be space for everybody.”

Dame Jenny said New Zealand needs to address both viewpoints, own its history, and find a way to move on.

The replica of James Cook’s Endeavour has now berthed at Gisborne’s port.

More than 400 people gathered along Waikanae Beach to watch a waka-led flotilla make its way into the inner harbour, with about 50 protestors waving tino rangatiratanga flags also greeting the ship.

A protest organiser, Tuta Ngarimu, said seeing the ship come up the harbour was emotional, because it was a symbol of colonisation.

Bonfires were again lit along the beach this morning at dawn at Tūranganui a Kiwa – this time not to guide the ships as happened on Saturday, but instead to give a message to the Endeavour that this whenua is occupied.

Mana whenua held a karakia at 6am, in an inter-denominational service, to acknowledge those killed by Cook’s crew.

Along with a range of iwi representatives from Tūranga.

Waka hourua which arrived on Saturday, left the inner harbour at 2.30am to meet the Endeavour and the other tall ships and take them around the bay to significant sites. They have since returned.

People are gathering at Waikanae beach to watch the ships come in and berth – which is due to be at about 11am – following that a civic ceremony will take place hosted by the mayor on the wharf. There will be speeches by Tuia 250 co-chair, Hoturoa Kerr, Gisborne Mayor Rehette Stoltz and the Governer General Dame Patsy Reddy.

Meanwhile protesters have been gathering throughout the morning – they say it will be a non-violent protest and are bringing a range of messages to the day.

They plan to march along the waterfront and around the inner harbour while the Endeavour comes in.

Ngāti Oneone spokesperson Nick Tūpara, the artist behind the Te Maro sculpture that was unveiled last week, turned down being a part of the civic ceremony.

“My gut tells me to say no, I want them to go down there and tell their story, I’d like to go and listen because I don’t know who they are and why they have decided to come.

Over the weekend, other Tuia 250 commemoration events included the Tuia Mātauranga Roadshow which is a truck with interactive resources to learn about traditional voyaging and a pop-up planetarium so the public can learn about celestial navigation.

Mr Kerr said it’s important that people learn the practicalities of what it’s like to be on the water and bringing this matauranga to life. 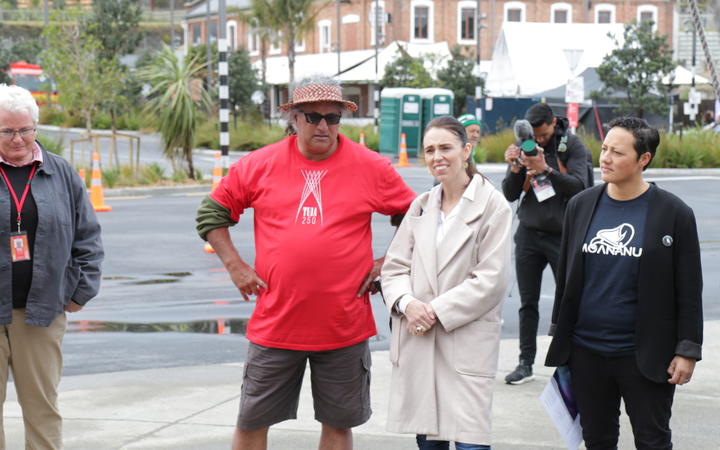 Prime Minister Jacinda Ardern who was in Gisborne for the Tuia 250 events at the weekend missed the arrival of the Endeavour.

But she told Morning Report she would be joining the commemorations in Auckland.

“I’m not in Gisborne because the Dutch prime minister is arriving in New Zealand.”

She said there was a danger in not acknowledging all aspects of history.

“We’ve had commemorations in New Zealand around Cook on a number of occasions but never before have we acknowledged actually the navigational history of Māori, we haven’t told the story of the loss of life when Cook arrived, the story of Te Maro.

“This is a chance to talk about the reality of New Zealand history … to be open about it. That may attract some protest but that is all part of the conversation.”

She said the expression of regret from British High Commissioner to the Gisborne iwi has had an impact.

“I do think that was significant.”

Alongside Tuia 250 there’s an educational truck travelling across the country telling the history of Aotearoa New Zealand.