Three Whakatāne women who led the charge for Māori wards in the district are ecstatic legislation change has been signalled. 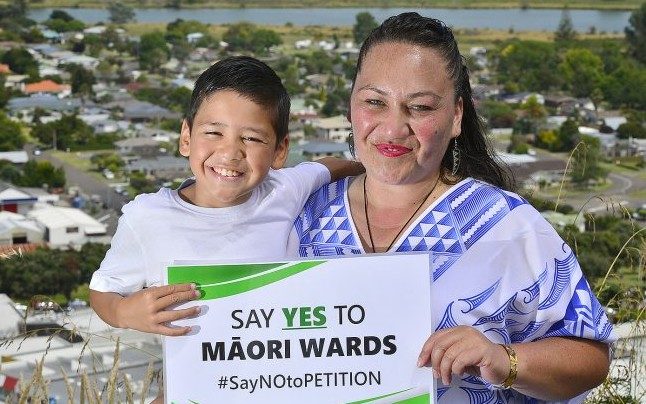 Toni Boynton, Mawera Karetai, and Danae Lee said they were stunned and excited to hear that Local Government Minister Nanaia Mahuta had made removing the poll provisions on Māori wards one of her top priorities.

The three have never given up on their desire to create Māori wards for the Whakatāne District Council and were in the midst of planning a petition when the news came through on Tuesday.

Boynton said it was incredibly unfair how their fight for Māori wards unfolded in 2018 and, although they had not given up, Mahuta’s comments provided hope that fair representation would happen sooner rather than later.

“It’s not a race issue, it’s an injustice, and it blocks out the voice of a treaty partner within local government,” she said.

“This is about recognising privilege in a system built for you by you. I am so happy to see we are moving to a more positive place.”

Māori wards are the only wards in which five percent of voters can call for a binding poll to overturn a council decision to implement them. There are no sections within the Local Electoral Act that give voters the same rights to demand a similar poll when a decision is made to create other wards, such as rural.

In late 2017, the Whakatāne council voted six to five to implement Māori wards. However, this decision was overturned in 2018 by a binding poll in which less than 50 percent of the voting population took part.

The three women campaigned hard during this time and felt the outcome was the “tyranny of the majority over the minority”.

Even if all registered Māori voted “yes” in the poll, or in a council election all Māori voted for a Māori candidate in their ward, they simply wouldn’t have the numbers to get it passed.

Boynton said on hearing about the proposed legislative change, she felt a sense of relief that other districts wouldn’t have to go through the same “David and Goliath” battle that Whakatāne did.

Kaipara and Ruapehu District Councils voted recently to establish Māori wards, while Northland Regional Councillor John Bain resigned and walked out of an October meeting during a debate over Māori wards. He said he could not support a “broken democracy”.

Lee said the idea that Māori should be, and could be, elected on merit was based in racism and ignored the fact that Māori did not begin on a level playing field with Pākehā.

She said it was inappropriate that white men were overly represented in local government and the motto should be “nothing about us, without us”.

“Everyone is born into a racist society and it’s up to us to overcome it,” she said.

“Unless you’re being actively anti-racist then you are passively upholding racist systems. You have to be actively challenging those systems that keep minorities down, to dismantle them. That can be a tough conversation to have with yourself but it’s one worth having.”

Karetai said it was also worth noting that the first-past-the-post system used for many council elections favoured the incumbent and did not allow for minority views to be represented in the same way that MMP did.

“It’s been well documented that people vote for the familiar,” she said.

“If we have more Māori representation on council then they are actively de-colonising that space just by being there. By being present other people are forced to think further about the discussion and decisions that are being made; people have to check themselves. There are only benefits to having Māori at the table, no disadvantages. Seeing more Māori faces in decision-making places will also encourage more to get involved.”

While there are deeper levels to the fact that Māori struggle to be elected, there is one simple theme and that is racism – something both Karetai and Boynton said they experienced when they ran in the last election.

Boynton was now feeling more optimistic about the future and said people only needed to look to the Bay of Plenty Regional Council, the first council to introduce Māori wards, to see a real success story.

She said the community had nothing to lose and everything to gain by introducing Māori wards.

The women said they would remain committed to their planned petition, so it was clear to the government there was community support.

In the meantime, they wanted to mihi all those who helped with the Māori ward fight in 2018 and were looking forward to travelling to Wellington in future to see the legislation signed.

Only three councils have Māori wards

Māori electorates have been a feature of national politics for more than 150 years, but at a local level just three of New Zealand’s 78 local authorities have Māori wards – the Bay of Plenty and Waikato regional councils and Wairoa District Council.

The Bay of Plenty Regional Council was the first council to introduce Māori wards and Kohi Māori constituency councillor Toi Iti has welcomed the move to make them easier to introduce.

“I mihi to the minister for her proposed amendments to the Local Electoral Act,” he said.

“The sections in question are unfair, inconsistent, and discriminatory against Māori. They always have been.

“This change has been a long time coming and is indicative of the reforms that this new government will be rolling out across the local government sector.”

Iti said though Māori wards were not a “fix-all panacea”, it was a start to get more Māori around council tables before the real mahi began.

“The mahi is working with the whole community, including councillors and staff, to navigate councils towards being fit-for-purpose organisations that can provide essential services, infrastructure and resource management for the wellbeing of all our communities, Māori and non-Māori alike,” he said.

“We will still have to overcome many challenges to get to that place, especially with the shifting seas we operate in, but this is certainly the kind of step change needed to get the waka in the water.”

Last week, the legislation around Māori wards was raised in the Whakatāne District Council chambers by Mayor Judy Turner, who voted in favour of Māori wards in 2017.

Whakatāne has held two polls on Māori wards, the results of which show favour may be growing in the district.